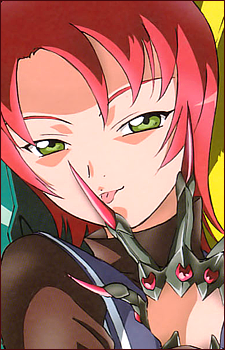 Tastes like death.
"I had to fight the urge to extend my blades and lick them. That's supervillian behavior and it gets your ass kicked."
— Nao Yuuki (pictured at right), The Sword of the Lord

Evil girls (generally cat girls or dark magical girls) are frequently armed with razor-sharp fingernails or claws as their primary melee weapon. If such is the case, her trademark gesture is to lick her claws in a cat-like fashion with a sinister grin on her face, sometimes after drawing blood with them.

They generally stop doing this after a Heel–Face Turn. Well, unless they're an Anti-Hero.

The trope's name is a play on the iconic Catchphrase from Kentucky Fried Chicken: "It's Finger Lickin' Good!"