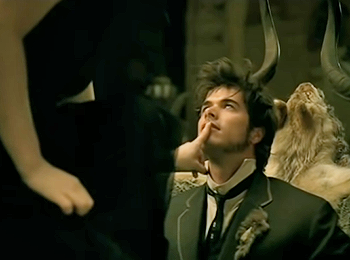 "When I put my finger on your lips it means you stop talking."
— Abby, Primeval
Advertisement:

Bob is either already talking or about to say something, but Alice wants to playfully silence him. So what does she do? Why, put the finger muzzle over his mouth of course!

Like a regular muzzle prevents dogs from opening their mouths, the Finger Muzzle prevents another person from opening his/her mouth by placing a finger over his/her mouth. It's used by both men and women, but more often than not, it's an intimate gesture. Sometimes, a kiss will follow the gesture, or an Indirect Kiss by touching the finger to their own lips. Or it will just be a means for a character to act flirtatious.

Not to be confused with Finger on Lips or Finger Gun. Related to the "Shut Up" Kiss and Hand Gagging. Compare Finger in a Barrel.