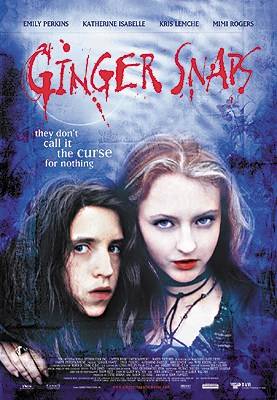 Ginger Fitzgerald: Out by sixteen, or dead on the scene, but together forever.
Brigitte Fitzgerald: United against life as we know it.
Advertisement:

Ginger Snaps is a 2000 Canadian teen horror film which uses lycanthropy as a metaphor for female puberty. The story revolves around the sullen and morbid Fitzgerald sisters, Brigitte and Ginger, outcasts at their high school, with no friends besides each other. The close bond between the sisters is put in danger after Ginger gets attacked and bitten by a strange beast in the woods. Soon following the incident, radical changes start happening in her body and behavior. Her parents and teachers brush it off as her finally starting her journey into adulthood, but Brigitte knows something far more sinister is going on.

The film spawned two follow-up movies in 2004 which were filmed back-to-back; Ginger Snaps 2: Unleashed, a direct sequel which puts Brigitte in a rehab clinic struggling with a werewolf curse of her own, and the direct-to-DVD Ginger Snaps Back: The Beginning, a prequel of sorts set in the early 19th century North American frontier. In 2020, a TV series reboot was announced.

"You know, we're almost not even related anymore..."