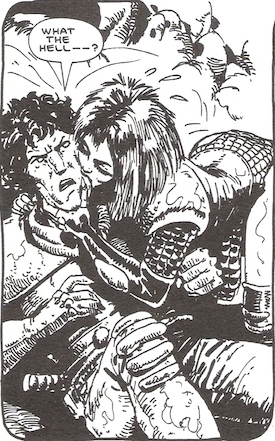 Alice and Bob have a somewhat antagonistic relationship and but they meet on somewhat civil terms during which time Alice notices some "sauce" is on Bob's face, but instead of telling him about it civilly, Alice (and it's typically Alice) decides to eat it directly off his face.

This is when a character licks/eats off the face or body of another person, usually an uneasy ally or Belligerent Sexual Tension romance partner at best or a Big Bad at worst. Unresolved Sexual Tension is a frequently observed between characters partaking in this; Combat Sadomasochism is also very common. The taster will most often outright lick whatever is on the man or woman directly off (blood and the face itself are common targets as well as, maybe, food). Sometimes, characters may use their fingers to pick and eat off someone. This is almost always presented with some degree of sensuality.

Expect the man or woman being tasted to be very uncomfortable and unnerved by this. No matter what, the licker will always comment on how the man or woman tastes, and he or she always tastes exquisite.

In the event that a guy does this to a woman, expect this to basically cement the male character as a pervert for better or worse.

A Lighter and Softer variation of this trope may see a character covered in food, such as after a Pie in the Face or Food Fight, and another character picking the food off the person with his/her finger and find it to be "not bad." These situations often overlap with Romance-Inducing Smudge.