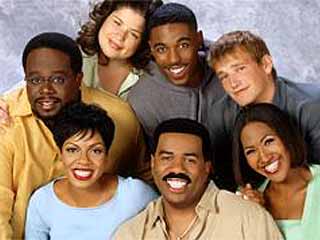 The Steve Harvey Show is a sitcom starring Steve Harvey and Cedric the Entertainer that aired on The WB for six seasons from the late 1990's to the early 2000's. Reruns can be seen daily on the music channel BET Her (formerly called Centric), Saturdays on TBS, & as of October 1, 2018, Get TV.

Steve Harvey plays Steve Hightower, a former funk singer who becomes a high school music teacher and finds out that the principal of the school is the girl he used to torment in high school due to her weight. Hilarity Ensues.

Not to be confused with Harvey's self-titled TV talk show, which premiered in 2012, or his radio series The Steve Harvey Morning Show.