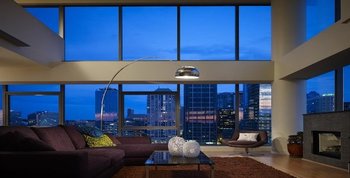 Related to Cool House, this trope is for characters who live in a sleek, modern high-rise apartment overlooking a cityscape. Maybe it comes with a 360-degree view of the metropolitan area, with a car elevator, an indoor pool, a retractable skylight. Stainless Steel appliances and fine art are optional.

The height suggests power (especially if they're a member of the Fiction 500): a mogul or baron likes to survey their domain. The setting conveys wealth, isolation, and influence, in the midst of teeming midtown. Said apartment is usually an indication of the character's chic style and taste. Inhabitants might be Wicked Cultured as well.

The Jeffersons could be the Trope Codifier: a married couple with a grown son (Lionel) that has moved out. George has his dry cleaning business keeping him nicely monied, and there are some wacky neighbors available for Comic Relief or for drama fodder. Much of the plot is confined to a limited space, which is ideal for television studio shooting.

Compare Big Fancy House. In sci-fi, may be housed in a Star Scraper.