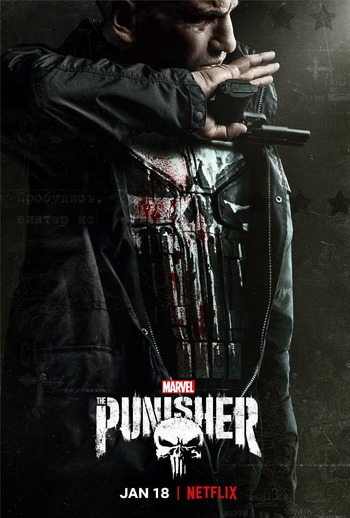 "Welcome back, Frank."
"All the things that I done, memories, they never hurt me. But the past, it's more than memories. It's the devil you sold your soul to. He's comin'. He's comin' to collect."
— Frank Castle
Advertisement:

The Punisher is an original series based on the Marvel Comics character of the same name. It's set in the Marvel Cinematic Universe — like most other shows produced by Marvel Television — alongside The Defenders, Daredevil, Jessica Jones, Luke Cage, and Iron Fist, spinning off from Daredevil. The series originally premiered on Netflix in 2017.

The series follows former United States Marine Corps Lieutenant Frank Castle (Jon Bernthal, reprising his role from Daredevil) who, after his wife, son and daughter are murdered in a shoot-out between rival gangs, decides to wage a one-man war on crime.

Haunted by memories of his past and hunted by law enforcement, Frank finds himself drawn back into an all-new war when he learns that what happened to his family may have more to do with his past in the Marine Corps than he thought.

On February 18, 2019, it was announced the 2nd season was going to be its final one as the series was canceled alongside Jessica Jones (2015), effectively killing off the final original Marvel shows on Netflix. In February 2022, the series, alongside the rest of the Defenders franchise, exited Netflix's platform, moving to Disney+ the next month.

The Punisher contains examples of: