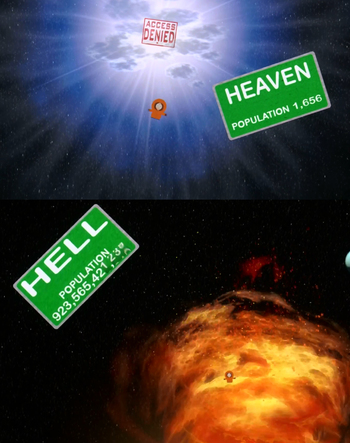 The road to Hell is sometimes defined to be so wide that people with basically slight or even no sin at all will end up there anyway when they die. This is typically done to make sure that people will stick to a very straight and very narrow path, or at least try to; though it may also be a sign that whoever's upstairs is more than a little bit of a jerk, if not actively malevolent. Some authors have taken this ease of entry into Hell Up to Eleven, making it not just easier, but almost automatically assured for everyone.

In universes like these, All Sins Are Equal, which tends to lead into It Gets Easier, as once one is trivially doomed to Hell, doing some "worse" things will not change anything.

If basically everyone gets sent to Hell in-universe, then it's an example of this trope.

This is related to Moral Event Horizon, only with the bar set so high that nearly everyone has already fallen into irredeemable evil. This makes life very easy for the Hell Seeker. Also gives more than usual resonance to the remark, "I'm Going to Hell for This."

Compare with All Crimes Are Equal, Jaywalking Will Ruin Your Life, and Failure Is the Only Option. Usually a form of Disproportionate Retribution.

open/close all folders
Anime and Manga
Comic Books
Fan Works
Films — Animated
Films — Live-Action
Literature
Live-Action TV
Music
Mythology and Religion
Radio
Tabletop Games
Video Games
Web Animation
Webcomics
Web Original
Western Animation
Real Life
See You in Hell.
Jesus answered, “I am the way and the truth and the life. No one comes to the Father except through me."
— John 14:6, The Bible (NIV)
Feedback

"THE BAD PARTS OF HEAVEN"

In "THE BAD PARTS OF HEAVEN", you can go to Hell even after going to Heaven if you curse or get your white clothes dirty.

"THE BAD PARTS OF HEAVEN"

In "THE BAD PARTS OF HEAVEN", you can go to Hell even after going to Heaven if you curse or get your white clothes dirty.