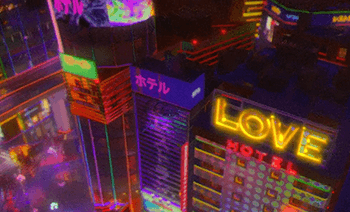 "Sinner's Row was a part of town that never slept. It's after midnight, but with all the lights, it's hard to tell. You can really see it all from up here."
— Gunvolt, Azure Striker Gunvolt
Advertisement:

Ever since they were invented, neon lights (or their more modern equivalents) have been associated with big cities. As such, an abundance of them is often used to characterise a place or help set a mood.

Bright, colourful lights and signs may serve to establish the city as one of the following (often with a good deal of overlap):

The neon city sometimes overlaps with City Noir, although those may be too grey to admit very much neon (and what there is will probably be showing Signs of Disrepair). See also Shining City (whose radiance is usually more metaphorical), Casino Park, and Cyberpunk with a Chance of Rain. Compare It's Always Mardi Gras in New Orleans, where the characters arrive at a big city at the one time of year with lots of bright flickering lights around. Some neon cities will consciously echo real-world cities known for their abundant bright signage, like Tokyo, Hong Kong, and Las Vegas.

(Note that, for the purposes of this trope, "neon" is defined broadly. Most "neon" lights don't actually use neon anymore, mostly being replaced by LED lights, but any bright city lights can be put to the same purpose.)