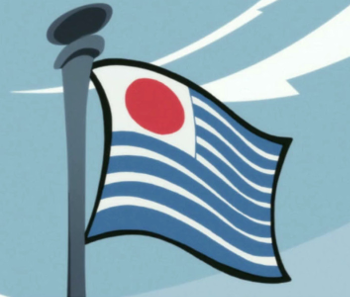 A setting in which the dominant culture is a fusion of American and Asian influences, resulting in an entire city (or world) that resembles a Chinatown writ large. Glass and steel skyscrapers with flared pagoda roofs, Chinese curses dropped into English speech, McNinjas working for The Mafia, that kind of thing.

This typically involves American culture blended with either Chinese culture, Japanese culture, or a vague Far East jumble. It can result from China, Japan, or America taking over the world, or it can be a mashup Fantasy Counterpart Culture. Unlike many Culture Chop Suey settings like Ancient Grome or Spexico, Americasia usually isn't the result of sloppiness or indifference, but a deliberate artistic choice.

Americasian settings were very common in '80s Cyberpunk, back when many thought that Japan was going to take over the world. They've been making a comeback in recent years with the increasing popularity of Japanese and Korean culture in the West, along with the recent economic mindset that China will take over the world. This trope is pretty specific to American culture rather than just any Western culture, in part because the United States is the closest Western country outside of Oceania to The Far East thanks to Alaska and has a large and rapidly growing Asian minority concentrated around the country's most culturally influential areas— California, New York City, and Washington, D.C.. A major factor was the Immigration and Nationality Act of 1965

, which replaced years of discriminatory country-of-origin quotas in favour of a skills and family reunification based system.

This is a very new trope, dating only about to the 1960s at the earliest; prior to that, Asian cultures were viewed as impossibly alien by most Americans (the various Chinatowns and Japanese cars becoming available on the West Coast as early as the 1950s notwithstanding). However, the opposite wasn't necessarily true in Japan and some parts of China, where Western culture caught on quite successfully - if not quite successfully enough to alter the aesthetic makeup of Asian cities.

Non-American examples of this aesthetic are also becoming more common due to factors like many Asian, especially East Asian, cities rapidly growing in economic development, along the way mixing influences both from the developed West (including naturally the U.S. itself) with their existing, traditional Asian cultures. This is especially the case where English is also a dominant local language; see the Philippines, for example, whose modern urban centres owed much of their recent planning, design and aesthetics to American norms especially in the last century (helped in no small part by direct U.S. colonialism)note not to mention the even earlier Spanish-colonial cultural borrowings, but which even more recently have seen an explosion of East Asian cultural borrowings too, with Chinese, Japanese and Korean brands now dominating the urban landscape, and where not a few billboards, logos and public signs are already in East Asian scripts despite the vast majority being used to the Roman alphabet. Singapore, one other highly English-proficient Southeast Asian country - albeit British-colonised rather than American - also stands as almost a succinct Real Life case of this trope, with prominent English-language, Latin-alphabet signage coexisting with signs in Chinese languages and scripts, and much of its modern infrastructure and urban planning based in part on Western norms, especially earlier on in its independent history.

Subtrope to Culture Chop Suey and We All Live in America. Please limit examples to settings where this is the dominant culture, not just an ethnic enclave or any random instance of American and Asian cultures mingling.