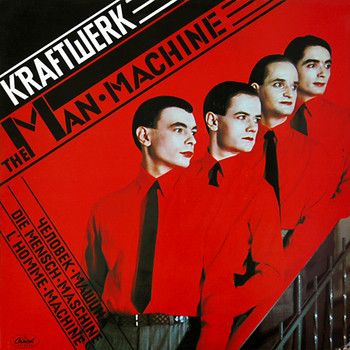 "She's a model and she's looking good/I'd like to take her home, that's understood/She plays hard to get, she smiles from time to time/It only takes a camera to change her mind..."
Advertisement:

The Man-Machine is a 1978 album by the German electronic band Kraftwerk. It was first released in German under the name Die Mensch-Machine, but later got an English release as well. The album saw the band continue to streamline the Synth-Pop sound they had pioneered on Trans-Europe Express, and is often considered one of their best, having spawned some of their most famous songs such as "The Robots", "The Model"note Which would be later covered by Rammstein and the Title Track. The album's campaign also marked the debut of their robotic alteregos.