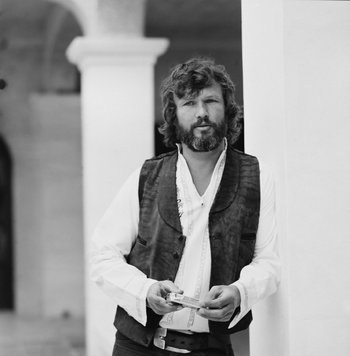 Kristoffer Kristofferson (born June 22, 1936 in Brownsville, Texas) is an American singer-songwriter and actor who has written and released a minor buttload of songs as a solo artist, in collaborations with other musicians, and with the supergroup The Highwaymen. Kristofferson's only major hit as a singer is "Why Me

", which topped the Hot Country Songs charts in 1973. As a composer, however, he has frequently written songs that became hits for other musicians, including "Me And Bobby McGee" (Janis Joplin), "Help Me Make It Through The Night" (Sammi Smith) and "Sunday Morning Comin' Down" (Johnny Cash).

He was best known in the 1970s for his roles in Sam Peckinpah westerns until the Box Office Bomb that was Heaven's Gate. Since then, he has played grizzled roles across most genres and levels of heroism, in a career that has spanned over fifty years.