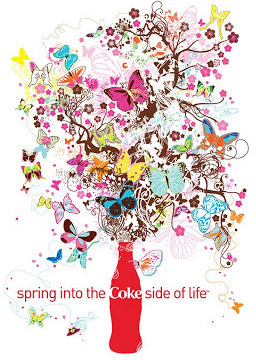 Because insect tree fountains are what you want to drink!
Advertisement:

This is something of a fashionable and stylistic approach in visual media. Overwhelmingly, these designs are made with vector graphics, to create solid areas of colour with crisp, geometrically neat outlines. Usually involves vivid colours over a monochrome background (white has preference as a neutral colour, but it can easily be black). The colour patterns can also be switched for the negative space, while the solid colour becomes the foreground.

It's easier to show than to describe, hence the picture. Look for examples of this rather abstract art in commercials and opening credits. In animated works, designs may flow outwards from a central point, gaining variety and complexity as they grow.

Compare this visual trope to the literary-only Purple Prose. Failure to maintain focus on the product can result in What Were They Selling Again? Video versions of this trope might employ Blipvert as well. Contrast Ascetic Aesthetic, Face on the Cover & Minimalistic Cover Art (although this can also be done in a very striking and artistic way).