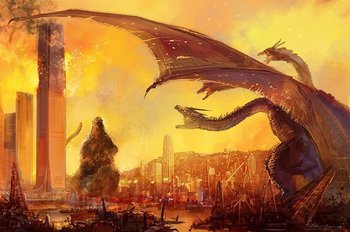 "SKREEEEEOONK!" "BIDIBIDIBIDIBIDI!"
"To fight monsters, we created monsters of our own."
— Raleigh Becket, Pacific Rim

What's better than having a huge monster? Having two huge monsters! Then making them fight each other!

A staple of monster- and kaiju-focused movies (but in no way limited to that medium), where two giant creatures square off in a no-holds-barred fight, just because they can. Makes for great visuals and even more collateral damage. As a highly visual trope, only examples shown on-scene should be added.

The word creature should be interpreted quite liberally here. It matters more how it looks than how it functions. Giant humanoid robots and other Humongous Mecha are explicitly included. For battles between giant machines and biological creatures see Mech vs. Beast.

In no small degree builds on Rule of Cool and Cool vs. Awesome. See also Everything's Better with Dinosaurs and Monster Mash. Primate vs. Reptile is an especially common variant, thanks to the iconic fight scene in King Kong (1933). Following Jurassic Park III (2001), the Spinosaurus vs. T. rex pairing also gained some popularity.

Any film set in a Lost World or 1 Million B.C. setting will likely have such a scene.