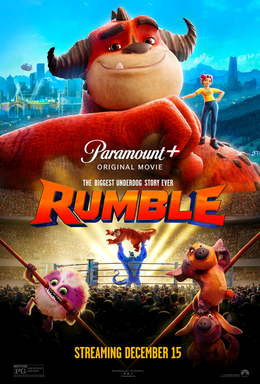 The Biggest Underdog Story Ever
Advertisement:

Rumble is an American computer-animated sports comedy film directed by Hamish Grieve and based on the book, "Monster on the Hill" by Rob Harrell. The film stars the voices of Geraldine Viswanathan, Will Arnett, Terry Crews, Becky Lynch, and Roman Reigns. Produced by Paramount Animation, WWE Studios, Walden Media and Reel FX Animation Studios, it was released on December 15th, 2021 on Paramount+. Though branded as a Paramount+ original, the film also became available on ePix in 2022 and is expected to reach Prime Video as well.

In a world where giant monsters are super athletes and compete in popular professional wrestling global sport, monster wrestling, teenage Winnie (Geraldine Viswanathan) seeks to follow in her father's footsteps as a manager by coaching a lovable underdog yet-inexperienced monster (Will Arnett) into a champion so that he can go up against the reigning champion Tentacular (Terry Crews) in order to restore the city of Stoker to its glory.

The teaser trailer dropped on February 26th, 2020 and can be seen here

. The official trailer dropped on November 26th, 2021 and can be seen here