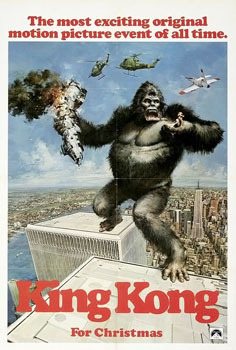 An original motion picture. You read that right!
The 1976 remake of King Kong, directed by John Guillermin and produced by Dino De Laurentiis.
Advertisement:

The story remains largely the same as in the 1933 original, but the characters and situations are changed: instead of a filmmaker seeking an exciting movie locale, an amoral oil executive (Charles Grodin) is seeking an uncharted island (hidden by a perpetual fog bank) where he hopes to find an enormous untapped deposit of crude. The requisite blonde, Dwan (Jessica Lange), is encountered at sea, adrift in a lifeboat, the sole survivor of a yacht explosion; and The Hero is a stowaway anthropologist (Jeff Bridges). The rest of the film plays out more or less as the previous version, albeit with a somewhat more realistic depiction of the natives and with fewer island hazards (the only oversized animals featured are Kong and a snake). The oil exec, upset to learn that the island's crude is unfit for refining, decides to "bring home the big one" in a very literal sense; when the hero brings Dwan back from Kong's clutches, Kong is captured and brought to New York in a gaudy publicity stunt. Kong misinterprets the intentions of pushy photographers, and the story goes on from there.

This film differs from the 1933 version in another, very important aspect that has influenced many later tellings of the story: the relationship between Kong and "his" girl. Fay Wray's Ann was treated as nothing more than a kidnapping victim, a prize for Kong. Dwan, on the other hand, is given several extended scenes—on the island, on the ship back to the United States, and in New York—actually forming a bizarre sort of bond with the big guy. And when Kong climbs to the top of the (then newly-constructed) Twin Towers of the World Trade Center and is attacked by the military, Dwan is right there, trying to be a human shield for him. But to no avail...