Film / Kiss of the Tarantula 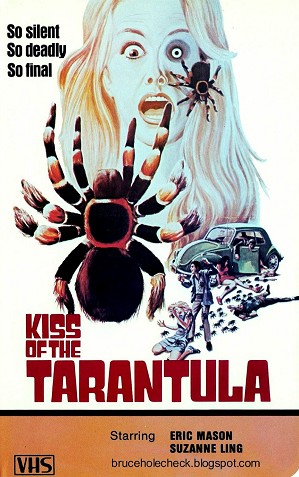 Kiss of the Tarantula (also known as Death Kisses and released in the UK as Shudder) is a 1976 US horror film starring Eric Mason (also known for Scream Blacula Scream), Suzanna Ling, Herman Wallner, Linda Spatz, Beverly Eddins and Patricia Landon. It was directed by Chris Munger

The main character is Susan Bradley (Ling), a young, spider-obsessed girl with a habit of siccing her pet tarantulas on those who wrong her or threaten her loved ones (which, outside of the spiders, consists of her father Harry, the local mortician). The movie is basically a genderswapped Willard with spiders instead of rats. There are twin subplots involving Susan's Creepy Uncle, Walter (Harry's brother): Investigating the mysterious deaths of several teens and his even-more creepy stalking of Susan.

The film received the RiffTrax treatment in 2015.