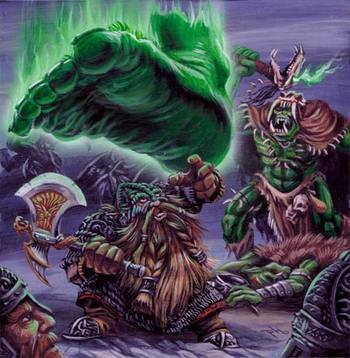 One of the most decisive ways to deliver someone a crushing defeat (yes, we can hear you groaning) is by having an enormous foot descend from the top of the screen and squish them.

Many western uses of this are Shout Outs to the one from the animated segments of Monty Python's Flying Circus and are not meant as serious. This is because western audiences often find the idea of a giant foot coming down rather silly. In eastern works, however, this trope is less likely to be used in humor and instead takes a more horrific or badass tone, due to a giant foot that crashes through the roof being an ominous Yōkai or a Shout-Out to Godzilla and other Kaiju fiction.

When the giant foot of doom is used to show something is badass, it's Trampled Underfoot. In many combat games it can become a Finishing Stomp. When the foot is your primary weapon it becomes a Goomba Stomp.

When the giant foot use is just plain silly or a gag for when a scene has gone on too long, it's a case of Drop the Cow.