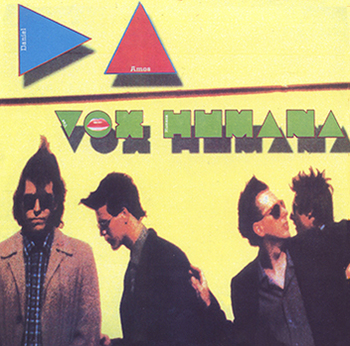 “My hair points to the sky, the place I’d rather be!”
It’s history that cannot be
felt by tiny souls.
Inside this chest beats a plastic heart,
and pleasure is its goal.
— “It’s Sick”
Advertisement:

Vox Humana (The Alarma Chronicles Volume III) is Daniel Amos’s sixth studio album, released in 1984. It took the New Wave Music of their previous two albums in a much more synthesized direction, with many tracks being outright Synth-Pop. The ravages of The '80s spared no band, and this album’s production bears witness to that.

Appropriately enough for an LP that wears the decade on its sleeve so blatantly, Vox Humana was a critique of Western society at that time. In a World… where greed and commercialism were celebrated, where new technology was as likely to distract people from each other as to unite them, and where nuclear annihilation could have come without warning at any time—what could one synth-pop band do? For DA, the answer was to pen bouncy, upbeat ditties that highlighted the absurdities of the world around them, and then pair those with somber ballads about reconnecting with God and their fellow humans.

The story in the liner notes

continued where Doppelgänger left off and paralleled the album’s lyrical themes: Terry Scott Taylor’s Author Avatar gets overtaken by a storm-breathing giant, comes to grips with the Awful Truth about society, and shrinks down to the size of an ant.

It was followed in 1986 by the final chapter of The Alarma Chronicles: Fearful Symmetry.