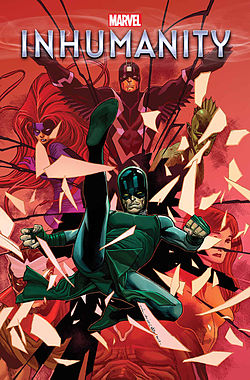 Are you Inhuman?
Advertisement:

Inhumanity is a Marvel Comics event for 2013 and 2014. It is the aftermath of the storyline started with Infinity and focuses on The Inhumans.

In the aftermath of the destruction of the Inhuman floating city of Attilan, the Earth is covered in mutagenic Terrigen Mists. Across the planet, people who thought they were normal humans soon discovered the truth - they were, in fact, part Inhuman. In a World… still recovering from the restoration of the Mutant population in Avengers vs. X-Men, can humanity handle a second race of super powered "freaks"? How do heroes and teams such as The Avengers, the X-Men and the Superior Spider-Man handle an ever-change world of this scope? And what of the Inhuman Royal Family - Black Bolt is missing once more, larger population of Inhumans active and their city destroyed, what are they to do?

The bulk of the story is told through the titular "Inhumanity" mini-series with "Inhuman" mini-series dealing with the people who have been transformed. Main titles who are part of the story take up the suffix .INH.