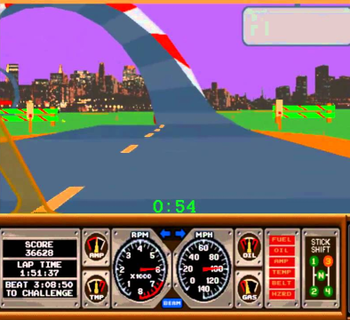 Don't get dizzy.
Hard Drivin' is a 1989 arcade racing game released by Atari. It was one of the first fully 3D games ever made, along with being one of the first to include textures, which were used on signs and a couple background objects. It touted itself as the "world's first authentic driving simulation game", and this claim held up well with critics of the time.
Advertisement:

The game consists, simply enough, of driving around the track before time runs out, and your score is based on your time. The beginning of the track forks into two choices, a "Speed Track" that emphasizes conventional high-speed driving ability, and a "Stunt Track" that features wildly dangerous (but still reality-based) obstacles. This makes Hard Drivin' one of the earliest examples of the stunt racing subgenre.

The game spawned two very similar sequels, Race Drivin' and Hard Drivin' 2 before falling into relative obscurity. It was ported to various consoles to varying degrees of success, and prototypes have surfaced in recent years of numerous other attempted ports, most notably one for the Nintendo Entertainment System.