This page contains unmarked spoilers for The Amazing Spider-Man Issue #700, and the story arc as a whole. You Have Been Warned. 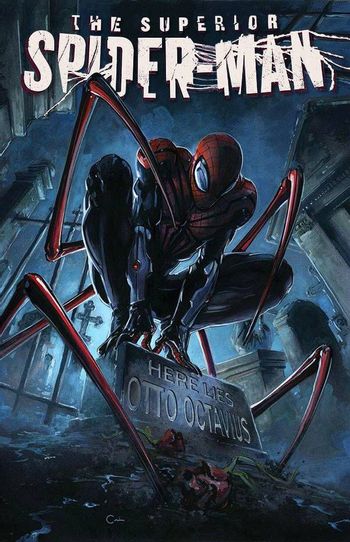 "The die is cast."
"Farewell, 'Otto Octavius.' From now on, my name is Peter Parker. And from this point on... I am Spider-Man."
Advertisement:

Part of Marvel Comics' Marvel NOW! initiative, Superior Spider-Man is a Spider-Man series released in January 2013, taking the place of Amazing Spider-Man. After the events of the 700th and final issue of the original volume of Amazing Spider-Man, Peter Parker and Dr. Octopus have switched bodies and Peter dies in the body of Dr Otto Octavius, but not before forcing him to relive Peter's life and force a Heel–Face Turn. Now there's a new Spider-Man in town - smarter, stronger, and SUPERIOR.

The title ended in April of 2014, after which Peter Parker retakes his body and resumes his normal operations to a degree in a new The Amazing Spider-Man title, just in time for The Amazing Spider-Man 2, however, two more issues are released in August and September taking place in a time travel interval during issue 19, setting the stage for Spider-Verse in which Otto plays a significant part.

In September of 2018, it was revealed that the title will be relaunched in the aftermath of the Spider-Geddon event, where Otto's friendship with the Peter Parker of Spider-Man (PS4) inspired him to become a hero again.

This was loosely adapted into the "Superior Spider-Man" arc in Marvel's Spider-Man.

open/close all folders
Storylines
All storylines are written by Dan Slott.
Advertisement: