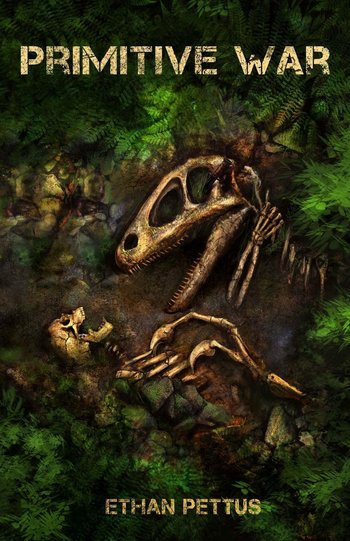 Primitive War is a military sci-fi series written by Ethan Pettus which takes place during the Cold War.

The premise of the first book is the following:

A search and rescue team known as Vulture Squad is sent to an isolated jungle valley to uncover the fate of a missing Green Beret platoon. As they hunt through the primordial depths of the valley, they discover ancient horrors that not only threaten to unravel their minds, but to end their lives as well. When the casualties mount, the men of Vulture Squad must abandon their human nature and give in to their savage instincts in order to survive...the Primitive War.

Being set during some of the most violent conflicts of the Cold War (The Vietnam War in the first novel and The Hunting of Stalker Force, and the Angolan Civil War in the sequel), it features a lot of graphic violence, adult language, drug use, and references to war-related tragedies. The series is also notable for having dinosaurs and other prehistoric species being depicted in a mostly scientifically accurate fashion.

In addition to the main series of novels, there are an illustrated bestiary and an anthology series called Primitive War: Dispatches.

2. Primitive War Dispatches Volume I - The Hunting of Stalker Force (2019)

3. Primitive War Dispatches Volume II - The Saraph of Simurgh (To be Released in 2022)