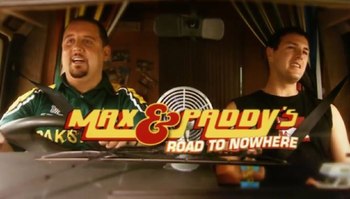 Max and Paddy's Road to Nowhere is Channel 4 Brit Com spun-off from the popular comedy Phoenix Nights that sees former Phoenix Club doormen Max (Peter Kay) and Paddy (Paddy McGuinness) aimlessly travelling around Britain in a motorhome that they bought with the proceeds from faking an assassination and pocketing the cash during the final episodes of Phoenix Nights.