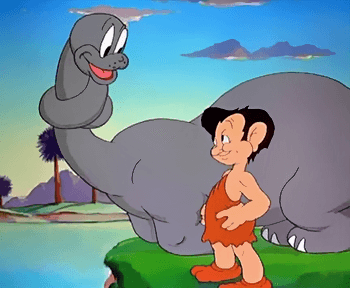 "A-pet-osaurus."
"A Brontosaurus — feeding merely on leaves. Perfectly harmless — unless it happens to step on us."
— Professor Challenger, The Lost World
Advertisement:

clade of saurischians are arguably the best-known dinosaurs after Tyrannosaurus rex. Among their most distinctive features are their massive sizes, which dwarf most dinosaurs considerably, and their Long Necks, which tend to reach several meters from their bodies and sometimes even stretch upwards, giving them a towering appearance.

Contributing to their popularity, the largest sauropods, such as Argentinosaurus

, comprise all the current contenders for largest land animal to have ever lived. As a result, they tend to be featured a lot in numerous forms of media, usually as very docile and friendly animals that spend their time migrating from one land to another in search of trees. This perception often comes from the assumption that they were so big as to have no predators and had such abundant food that they wouldn't need to be territorial, leaving them with little reason for aggression. In reality, some sauropods (especially as babies) were small enough to be preyed on by large theropods, and elephants (their modern-day counterpart as the largest land animal) are in a similar situation yet can be very territorial and aggressive.

Sauropods are frequent victims of Artistic License – Paleontology, for example grinding and chewing leaves as they browse the treetops, which their jaws were incapable of doingnote They actually seem to have swallowed pebbles, called gastroliths, to help grind up their food. As they became extinct millions of years before the first humans, we can only make educated guesses about what sort of behavior sauropods displayed in real life; their popular image as friendly animals mainly stems from the fact that they were herbivorous (and to a lesser extent the somewhat debatable idea that they had no natural predators, and thus little need to be all that aggressive). This also falls into Animal Stereotype, given the usual depiction of sauropods as friendly and non-territorial animals. Also a subtrope for Herbivores Are Friendly. On the rare occasion when sauropods are portrayed as hostile, it's usually when they're fighting off a predator. In stories where dinosaurs as a whole are shown to be violent and aggressive, sauropods are often the exception.

Due to their already tame demeanor, sauropods are commonly depicted as Domesticated Dinosaurs. May also overlap with Dumb Dinos if a sauropod's niceness and docile nature becomes detrimental to the point where they are unable to recognize the threat of an oncoming predator.

Compare Stock Dinosaurs, due to sauropods being one of the most recognizable types of dinosaurs in popular culture. Contrast Predators Are Mean and Raptor Attack, with the latter also serving as a stereotypical depiction of maniraptorian dinosaurs, in addition to the obvious inaccuracies like exaggerated size and constantly-aggressive nature towards its surroundings. Also contrast Headbutting Pachy, Temper-Ceratops, and Tough Armored Dinosaur, for herbivorous dinosaurs portrayed as dangerous and aggressive. Compare Social Ornithopod for another type of dinosaur typically depicted as a gentle (and social) herbivore, and Honorable Elephant and Genial Giraffe for the modern-day equivalents.

In "Putt-Putt Travels Through Time", our title character comes across a sleeping Brachiosaurus, who is more than willing to move her tail blocking a path when asked to.

In "Putt-Putt Travels Through Time", our title character comes across a sleeping Brachiosaurus, who is more than willing to move her tail blocking a path when asked to.