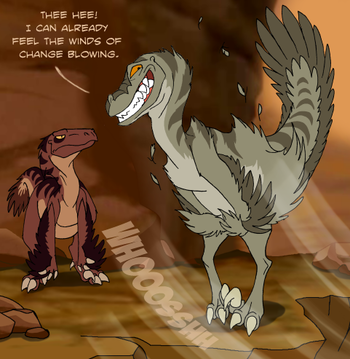 "[Scientists], stop ruining everyone's fun when it comes to dinosaurs! I've never met a dinosaur that a scientist hasn't tried to ruin; Jurassic Park comes out and everyone's enjoying the T. rex and the velociraptors, but then Johnny Scientist jumps up and goes, "Um, actually, we did a little bit more science, and we've learned that velociraptors were 2' tall and feathered and could be trained to fetch slippers. Also, the T. rex was more of a scavenger than a hunter, and all the other dinosaurs used to bully it and knock its schoolbooks out of its tiny, pathetic arms."
— Zero Punctuation review of Jurassic World: Evolution
Advertisement:

For centuries, dinosaurs were seen as reptilian animals and were often treated as little more than giant, hulking monsters, especially in fiction. Within the last few decades, researchers have re-evaluated these ideas. Newer research has revealed that dinosaurs were overall much more like birds than lizards— in fact, birds are themselves considered to be very specialized dinosaurs based on mountains of evidence available in the fossil record, with a line being drawn to distinguish "avian dinosaurs" (birds) from "non-avian dinosaurs" (classical prehistoric dinosaurs).

This, however... hasn't gone well with the mainstream media. People like their big, scary, roaring and sulking lizard creatures, even if the actual animals were anything but hulking monsters (in fact, most dinosaurs are and were small). Even many dinosaur enthusiasts (many who grew up on media such as Jurassic Park, which was inaccurate even at the time) are averse to the idea. Dinosaurs in media still tend to be based on older reconstructions, either because the artists didn't care enough to make them accurate, because they didn't know better, or because they simply don't like the contemporary reconstructions. Being generous, it can sometimes be attributed to budget—feathers will get blown around by wind and the motion of the animal or "expand" like a bird's wing in flight, meaning that they need to in visual media as well or else invite the Uncanny Valley, whereas a scaly or otherwise hairless animal doesn't typically have this requirement. That said, this may be laziness or overthinking on part of the animators, since body plumage tend to lay flat on the body so there would be no need to animate individual feathers (after all, there are plenty of CGI birds that clearly didn't have this issue).

Feathered dinosaurs were hit hard with this stigma.

The idea of feathered dinosaurs tends to be mocked and scoffed at in media. Contrary to common belief, not all dinosaurs are theorized to have had feathers— just many theropods (almost all of them being coelurosaurs) and a few of the smaller ornithischians.note Given the scant nature of dinosaur integument in the fossil record it's of course quite possible that many more dinosaurs than these were also feathered to some extent, but the aforementioned groups are the only ones unanimously agreed upon. It's also perfectly possible for dinosaurs to have had both scales and feathersnote Many birds do, in fact.. However, the popular view of feathered dinosaurs is a giant fluffy dinosaur with brightly coloured feathers. Tyrannosaurus rex has received most of the brunt of this issue. Due to its popularity, it's the poster-child for feathered dinosaurs, albeit highly misguidedly: paleontologists aren't quite sure whether they were fully feathered or not (or even if it had feathers), but the mainstream image is that tyrannosauruses are now "cute and cuddly". Feathered dinosaurs bring to mind fowl like chickens and ducks, rather than the equally-feathered-but-frightening modern-day raptors or extinct terror birds.note Incidentally, there is an often parroted myth that modern chickens specifically are thought to be the closest living relatives to the Tyrannosaurus, which doesn't help the case. In truth almost all birds would be equally related to non-avian dinosaurs which includes above mentioned dangerous species. Large ratites such as ostriches, emus, and especially cassowaries, also feathered-but-frightening, tend to be ignored in the subject of feathered dinosaurs as well (and the fact that ostriches themselves are not taken so seriously in media doesn't help), despite being the closest things to living prehistoric dinosaurs not to mention many dinosaurs resembling them such as Ornithomimus, Struthiomimus (whose name literally means "ostrich mimic"), and Gallimimus.

As a consequence of the above, feathered dinosaurs in media tend to be joke characters; they're goofy looking and often goofy acting, particularly making failed attempts at flying which frequently happens with Archaeopteryx, arguably the most famous of all feathered dinosaurs.note There is a common misconception that feathers evolved for flight, when in reality they evolved first for warmth and display while flight came much later. After all, flightless birds still possess feathers. A major exception to this rule is the dromaeosaurs, a.k.a. raptors, which definitely had feathers due to fossil evidence (with the biggest kicker being the discovery

of a tail preserved in amber, feathers and all). This may be because raptors are almost always portrayed as small, screeching Lightning Bruisers as a counteract to the "giant, roaring brutes" image— in fact, they were the very dinosaurs to break that stereotype and revive the bird-dinosaur connection theory. Feathered dromaeosaurs in media will usually be more bizarre-looking than goofy, but even then, they won't be taken as "seriously" as the classic scaly version. The short version is that feathered dinosaurs are typically only actually unintimidating because they're deliberately made to be so by people who don't like the idea of it; a real encounter with a fully-feathered Tyrannosaurus rex would be just as terrifying as with a scaly one because it's still a gigantic apex predator. If you still need some modern day perspective to this, just watch the climax of A Bug's Life and ask yourself if those cute feathers made the baby birds any less terrifying when Hopper got fed to them.

In Japanese media, however, feathered dinosaurs are more common and less likely to be depicted as goofy, with a feathered T. rex being just as much of a threat as a scaly one. This may be due to Japan's emphasis on compulsory biology education for children, which results in more familiarity with modern scientific concepts. The growth of the internet has also led to increased acceptance of the idea, to the point of complaining about the lack of feathers on certain dinosaurs, though not without a good amount of people still joking about the T. rex looking like a massive chicken (though making even the big, hulking lizard version cute and cuddly is also not unheard of).

It should be pointed out that the idea of feathered dinosaurs is not in fact as recent as many are led to believe. While definite evidence of feathers on dinosaur fossils (and broad acceptance of the idea in the paleontological community) is indeed relatively recent, well-supported speculation of feathers on certain dinosaurs is almost as old as the basic hypothesis of a bird-dinosaur evolutionary connection from the 1800s. Even without smoking gun evidence found in the late 1980s, paleontologists had been almost certain some dinosaurs had feathers and rendered them with such as far back as the 1970s.

Naturally, a subtrope of Artistic License – Paleontology. Contrast Feathered Fiend. Compare Basilisk and Cockatrice and Feathered Dragons, which are usually not seen as goofy.note The fact that artists have far more freedom with feather and body designs probably helps though. See also Creepy Hairless Animal, for when the absence of fur or feathers makes an animal scarier. See Doofy Dodo and Quacking Up for subtropes applied to avian dinosaurs.