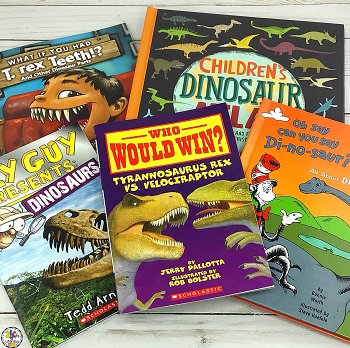 This is a list of works with a large focus on dinosaurs and all things dinosaur-related. In many of these works, dinosaurs are anthropomorphic main characters. In other cases, humans interact with them for one reason or another. And in still other cases, they're just another kind of animal just doing their thing.

And some examples are just... weird.

This index is only for examples of works where (non avian) dinosaurs are an essential part of the overall story. Works where dinosaurs appear but are not the focus are listed on Everything's Better with Dinosaurs, where they are just added at certain points due to Rule of Cool. For simplicity's sake, works mainly featuring other Mesozoic reptiles that aren't dinosaurs (like pterosaurs, mosasaurs, plesiosaurs... etc) can also go in this index. Although birds are dinosaurs, works featuring only Cenozoic era birds as the focus of the story, like DuckTales (1987) and its reboot, DuckTales (2017), shouldn't be listed, again for simplicity's sake.