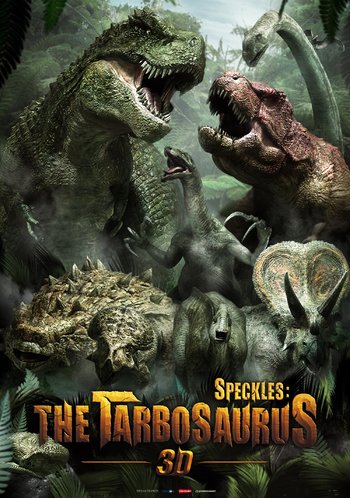 Speckles: The Tarbosaurus, also known as Tarbosaurus 3D or The Dino King in the US, is a computer-animated dinosaur film from South Korea.

About 70 million years ago, dinosaurs ruled the Korean Peninsula the same way they ruled the rest of the Earth. At that time, the part of the land now known as Jeonnam Yeosu was the forest habitat of a powerful carnivorous dinosaur: Tarbosaurus. The youngest of a family of Tarbosaurus, Speckles is a curious and playful child. Along with his mother and siblings, he lives happily in the forest, waiting patiently to learn to hunt. When that day arrives, it marks the beginning of a long and painful journey into adulthood for Speckles.

The cunning One-eye, an older Tyrannosaurus rex looking for a new home, attacks Speckles's herd one day and, smelling sure victory, viciously tears Speckles's family away from him. Now on his own, Speckles meets up with another lonely, lost Tarbosaurus. Blue Eyes becomes his constant companion for two decades and the mother of his own children. But fate is fickle and Speckles's troubles with One-eye are not over. Revenge, death, fear, and sadness are all in Speckles's future - as are happiness and hope.