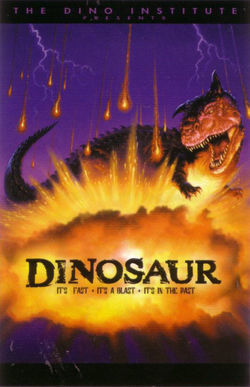 The future is truly in the past!
Advertisement:

Dinosaur, originally named Countdown to Extinction, is a ride at Disney's Animal Kingdom in Walt Disney World. It is filled with references to the 2000 film of the same name, as the two projects were co-developed together.

The premise is that a group known as The Dino Institute has successfully perfected time travel and wishes to take a tour group (the riders) to see the Mesozoic. Doctor Seeker, however, wants to send them to the end of the Age of Dinosaurs to rescue an Iguanodon. From there, things fall apart pretty fast...

Tropes feature in this ride include: