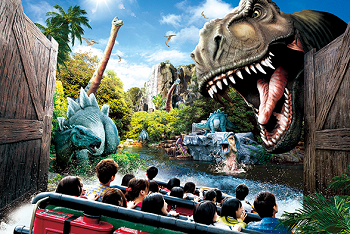 Click here to see image for Jurassic World: The Ride 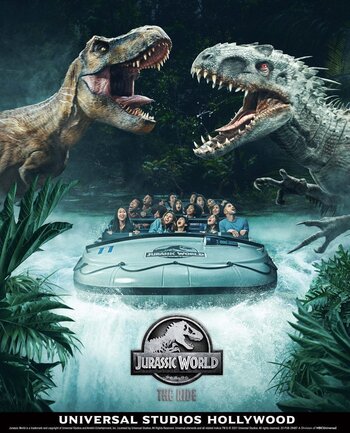 Time, the ever flowing river…
Come with us now to a time before man…
When the river flowed through a new born world…
And giants walked the earth…
Welcome… to Jurassic Park.
Advertisement:

Jurassic Park River Adventure, or Jurassic Park: The Ride, as it is also known, is a boat-based attraction at all of the Universal Studios parks. It is a spin-off of the Jurassic Park films, with its premise revolving around being given a boat tour of a now-completed Jurassic Park and first seeing herbivorous dinosaurs like Ultrasaurus and Stegosaurus. Things then go awry when the boat is knocked off course and into an off-limits zone, where the carnivorous dinosaurs have now escaped into. The riders are then sent face to face with the likes of the Dilophosaurus and Velociraptor before just narrowly escaping the jaws of a hungry Tyrannosaurus and then plummeting down an 85 ft drop to safety.

The ride first began development very early on, with it already being on the drawing board 18 months before the first Jurassic Park film was released into theaters; concept art of it even appears in the background of one scene in the movie itself. The reason for its early development was simply that Steven Spielberg and the park's management could see its theme park potential straight away.

After the hurdles of figuring out how to design working and realistic-looking dinosaur animatronics for the attraction were worked through, the ride finally opened at Universal Studios Hollywood on June 21, 1996; with Spielberg and some of the movie's cast (Jeff Goldblum, Ariana Richards and Joseph Mazzello) being in attendance for the grand opening.

Plans to duplicate the ride for the Florida park were immediately put into action, with the initial plans to have the ride being located right next to Back to the Future: The Ride, until it was later decided that Jurassic Park was a big enough franchise to warrant its own dedicated area. It would be made into one of the several "islands" at the location's new park, Islands of Adventure. For a while, plans to duplicate the ride to Florida were thrown off the table altogether, and instead the Jurassic Park area would contain a "Jeep Safari" ride inspired by the movie, as well as a "Helicoptour" simulator attraction. Budget constrictions resulted in the idea of duplicating Hollywood's ride being revisited, albeit with a few changes made to it. The ride at last opened in Florida the same time the Islands of Adventure park did, on May 28, 1999.

A third version, which for the most part is a near-exact replica of Florida's version of the ride, opened with Universal Studios Japan on March 31, 2001, the park also containing a (slightly downsized) Jurassic Park area.

An alternate raft-ride version of the attraction that nonetheless shares the same story with the others, opened with Universal Studios Singapore on May 28, 2011, under the name Jurassic Park Rapids Adventure.

The Hollywood version of the ride closed on September 3, 2018 to be re-themed around Jurassic World, which opened on July 12, 2019. It is currently unknown whether or not the other iterations of the ride will follow suit.

This concludes your tranquil journey through the world of the dinosaurs. Please join us again soon on your next visit to Universal Studios.