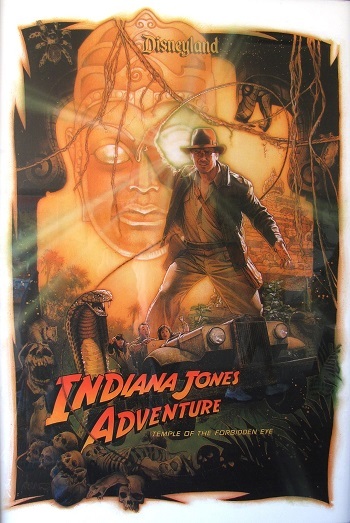 "Tourists, why'd it have to be tourists?"
— Indiana Jones
Advertisement:

Indiana Jones Adventure is an enhanced motion vehicle (EMV) dark ride at the Disney Theme Parks. Based on the Indiana Jones series, the attraction sends guests on a madcap journey through a lost temple, with Indiana himself there to guide them along the way.

It first opened at Disneyland on March 4th, 1995, being given the name Indiana Jones Adventure: Temple of the Forbidden Eye. The backstory behind the ride explains that after discovering the lost pieces of an ancient map, Indy was able to find the buried Temple of the Forbidden Eye, prompting a huge excavation of the location lead by Jones and his partner, Sallah. It's soon discovered that the temple is home to the ancient deity, Mara, who offers three possible gifts to anyone that enters: earthly riches, eternal youth, or visions of the future. The one condition being that the visiting mortal cannot look into the eyes of Mara, or else they'll be forced through the "Gates of Doom" and never be seen again.

In an effort to raise funds, Sallah begins to conduct tours of the temple for visitors all around the world; but after a series of disappearances, Indy decides to venture into the deepest parts of the temple in order to find the lost tourists, but never returns himself. Before boarding re-purposed military transports for the trip, guests are given constant reminders by Sallah to not look into the eyes of the deity, but you can imagine how well things go from there...

A mostly identical version of the ride, Indiana Jones and the Temple of the Crystal Skull can be found at Tokyo DisneySea, which instead revolves an evil skull artifact (that has no relation to the skull from the fourth movie). It replaces the Indian setting with a South American one and replaces the lava pits with a tornado effect.