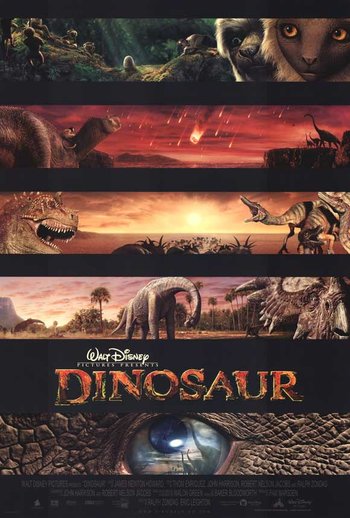 "It's your choice, not your fate."
Aladar: Look, Neera. We watch out for each other, and we all stand a chance of getting to your Nesting Grounds.
Neera: You sound so sure.
Aladar: I'm not, but it's all I know.
Advertisement:

Dinosaur is the 39th entry in the Disney Animated Canon, released in 2000. It is an extremely unique case for the canon, particularly for the time period it was released in, as it is a hybrid of live-action photography for its settings, and CGI animation for its characters, special effects, and whatnot.

The hero is Aladar, an Iguanodon

. His egg was separated from his family through a very convoluted turn of events, and made its way to an island. There, he was found by a family of lemurs, who adopt him when he is born (although the patriarch lemur opposes initially). Time passes offscreen and afterwards we see the adult Aladar living care-free with the primates in the island.

Sadly, a meteor strike destroys the island and Aladar and his adoptive family are forced to escape to the mainland. Once there, the main plot kicks in and they join a herd of similarly displaced animals who are migrating through the vast, trackless desert with treacherous terrain and desperate, starving predators. They are seeking literally greener pastures, a valley known as the Nesting Grounds, which is apparently the only fertile land left untouched by the meteor. The herd is led by Kron, an old, hard-assed Iguanodon — the first member of his own species Aladar has ever met — who insists that everyone follow his orders even if it kills them all. He refuses to make concessions for the oldest and youngest members of the herd, an issue that he and Aladar especially lock horns thumbspikes over. Eventually, Aladar's compassionate ways begin to transform the lives of those around him, and he may be what the herd needs to reach the Nesting Grounds and a better future.

Not to be confused with Dinosaurs or with the similarly-titled documentary Dinosaur!.

None of us really know what changes big or small lie ahead. But one thing is certain: our journey's not over. We can only hope that, in some small way, our time here will be remembered.