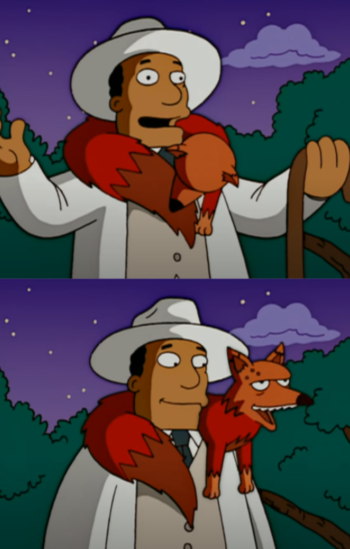 "Beatrice Bright is for animal rights—
She's waiting for Animal Day to arrive.
And though you see her
In her new fox fur,
The fox that she wears is alive."
— "Warmhearted" by Shel Silverstein
Advertisement:

Basically when a character is wearing one or more fur-bearing animals like a fur garment.

This is usually done to show a close relationship between an owner and pet that the pet would do this, or as a joke where The Reveal is that the garment is of living animals.

This also nicely averts Fur and Loathing, unless the animals are enslaved to do this.

A Sub-Trope of Pretty in Mink, Improvised Clothes.