Characters who appear in the 2000 film Dinosaur. 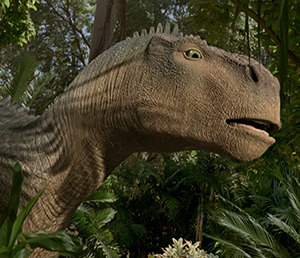 "Stand together!"
"If we look out for each other, we all stand a chance of getting to your Nesting Grounds."
Voiced by: D.B. Sweeney

The main protagonist, an Iguanodon whose compassionate ways may save his friends, family, and the herd. 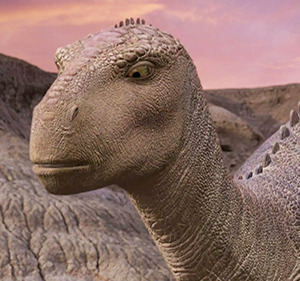 "It's okay, little ones. We're going to make it."
"Everything's so different... I don't know what to think anymore."
Voiced by: Julianna Margulies 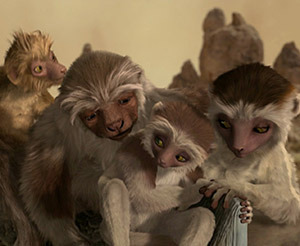 The lemurs who adopted Aladar when he showed up on their island. Yar is the elderly patriarch, Plio is his daughter and the Team Mom, and Zini and Suri are Plio's brother and daughter. 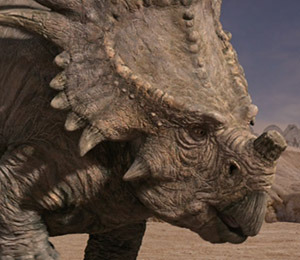 "Who knows what we'll find. The hard part now is just getting there."
"Who booked this trip anyway?"
Voiced by: Della Reese (film and PlayStation 2 game); Billy West (PlayStation 1 and PC games)

An elderly, wizened Styracosaurus who befriends the group. 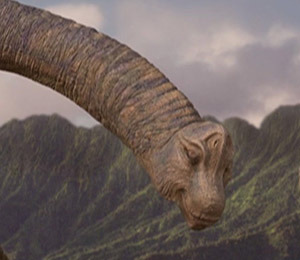 "All this pushing and shoving about, just for a place to sleep! I'm not used to this kind of behavior."
"I, for one, am not willing to die here!"
Voiced by: Joan Plowright (film and PlayStation 2 game); Tress MacNeille (PlayStation 1 and PC games)

A massive, elderly Brachiosaurus, who is quite the Gentle Giant. 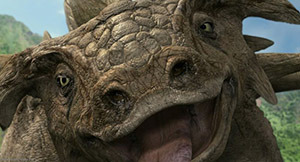 "Keep those little legs moving Url! Or you'll get left behind!"
Voiced by: Frank Welker 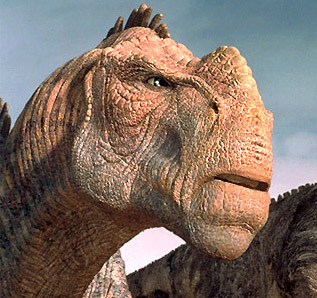 "Our survival - our future - is over these rocks! NOW LET'S GO HOME!!!"
Neera: If we keep going like this, we'll lose half the herd!
Kron: Then we save the half that deserves to live.
Voiced by: Samuel E. Wright

The aggressive, domineering leader of the herd, whose Darwinist philosophy quickly begins to clash with Aladar's benevolent ways. 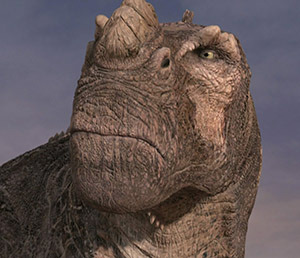 "Unless you got a death wish, you and that little parasite better get MOVING!!"
"But why doesn't he let them accept their fate? I've accepted mine... to die here. It's the way things are."
Voiced by: Peter Siraguisa

Kron's lieutenant, who's more than he appears.

The Orphans
Voiced by: Frank Welker

A pair of orphaned Iguanodon who befriend Neera during the journey. 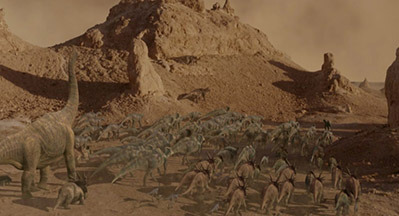 The herd of dinosaurs led by Kron during the movie. 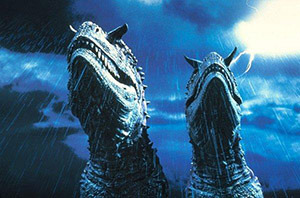 "A mouthful of teeth with bad attitude!"
Voiced by: Frank Welker

Two traveling Carnotaurus on the herd's trail, and the primary threat on their journey.

The Velociraptors
Voiced by: Frank Welker

A pack of tiny but menacing predators.

Flia
"I'll have a look."
Voiced by: Rebecca Wink

A Pteranodon who is exclusive to the Playstation One and PC games. She is one of the three playable characters (aside from Aladar and Zini).