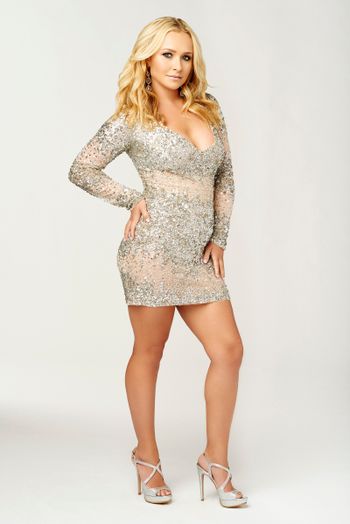 Not to be confused with Hayden Planetarium. Or Miranda Lambert. Or Florence Pugh either.
"Hi! I’m Hayden Panettiere, and I'm hot enough that I know I have your attention for at least 30 seconds."
— The John McCain Funny Or Die "ad"
Advertisement:

Hayden Leslie Panettiere was born on August 21, 1989 in Palisades, New York, to a firefighter father and an actress mother, and was steered into the latter profession at an early age (think months). Panettiere was known for her roles on the soap operas One Life to Live and Guiding Light and for her Disney work (most famously A Bug's Life and Remember the Titans - though she was never a real Disney star, which may have been for the best) before her Star-Making Role as Claire Bennet on Heroes turned her into a heartthrob for teenage boys - and their fathers (and possibly their fathers).

Fun-loving, flirty and fond of animals, she's continued to do voiceover work (for projects ranging from Robot Chicken to American Dad! to Hoodwinked Too! Hood vs. Evil) and to do roles that remind people as little of cheerleaders as possible (Amanda Knox: Murder on Trial in Italy, Scream 4, Nashville); she also has, by her own admission, a fondness for older men (hence her relationships with Heroes co-star Milo Ventimiglia and boxer Wladimir Klitschko - a case of Life Imitates Artnote  see the "Jessica Stays Over" episode of Malcolm in the Middle and the movie Shanghai Kiss) and tattoos, though to a lesser extent than some. Oh, and she's likely very grateful to Eliza Dushku for calling out

The Daily Mail after they dissed her

After a crapload of fakes, the real Hayden is now on Twitter

. And while she has yet to be the subject of a One-Woman Song, there is a band who named themselves in her honour

Demonstrating to even her most in-denial fans that She Is All Grown Up, Hayden became the mother of Kaya Evdokia Klitschko on December 9, 2014 with her then-husband Wladimir Klitschko. Sadly, she voluntarily checked herself into treatment for postpartum depression in October 2015—and returned to treatment in May 2016, seeking healthier ways of dealing with it (which some fans suspect contributed in ABC's cancellation of Nashville). It was her last credited role since then. She divorced Klitschko in 2018, and dated Brian Hickerson. Unfortunately, the pair split over his abuse toward her in 2020. Hayden, who had already advocated for environmental causes, called for other domestic violence survivors to come forward with their stories.

Sam walks around the cabin in nothing but a towel.

Sam walks around the cabin in nothing but a towel.