Series / Touched by an Angel 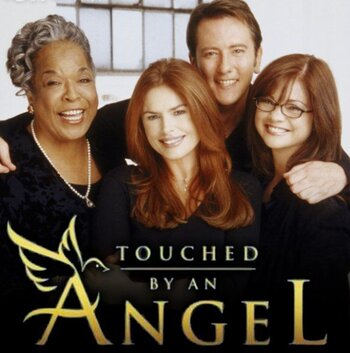 They will walk with you.
Advertisement:

This CBS drama, which ran from 1994 to 2003, follows the adventures of angel Monica (Roma Downey). Under the tutelage of supervisor Tess (Della Reese), and with the frequent assistance of an angel of death named Andrew (John Dye), she's a "caseworker" who goes from place to place to help various people overcome their problems by steering them towards God. Late in the seventh season, a fourth main character, Gloria (Valerie Bertinelli), is introduced. As she is a newly created angel, she tags along with the others to learn how to help people.

This show has been mocked for its insistently heartwarming, tearjerking nature, but its nine-year run is proof it has plenty of fans, and one can't fault its good intentions and wholesomeness.