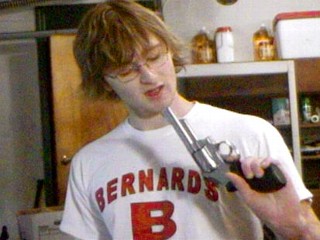 "Ohhh, so THIS is the end that flaming death comes out of..."
"Don't worry guys, it isn't loaded."
— Terry Kath, last words before accidentally shooting himself in the head
Advertisement:

There are some basic rules for safely using guns. Unfortunately, not everyone knows what they are since many people are not used to firearms and/or are just Too Dumb to Live.

This trope is when somebody unfamiliar with firearms does something reckless with guns that endangers others. Whether it's some schmuck in the middle of a Zombie Apocalypse or a bank robber, screwing up is still dangerous. When somebody who should know proper gun safety, such as soldiers or police, uses guns recklessly because the writer doesn't know any better, that's Artistic License – Gun Safety.

If somebody gets shot because guns are used recklessly and it's played seriously, that's I Just Shot Marvin in the Face. If safety is ignored or somebody gets shot for laughs, that's Juggling Loaded Guns. If a gun goes off randomly despite observance of Gun Safety, that's Reliably Unreliable Guns. See also Remonstrating with a Gun. Gun Twirling and Pants-Positive Safety are almost always this trope when they aren't Artistic License – Gun Safety. If the gun-handler themself is killed, it's an Accidental Suicide.

Perhaps realizing the high number of occasions where actors (due to the script or their own inexperience) may mishandle guns, it's not uncommon to discover that firearms that are seen in film and TV productions often end up (when examined in detail) being carved pieces of wood or molded plastic.

This trope is unfortunately Truth in Television, often with tragic results. In the United States, about one in 50 of all firearm deaths have this as their cause, with some being children of the actual gun owners. Even in historical military contexts (such as the time of the The Vietnam War and earlier), quite a number of tenets of modern gun safety (such as always keeping your fingers off of the trigger until actually shooting) were not universally or thoroughly drilled into soldiers, though the required complexity for firing the sorts of guns that predated the use of metallic cartridges made it difficult for sudden-shooting accidents to occur with them.

Shooting while surfing--what could go wrong?

Shooting while surfing--what could go wrong?