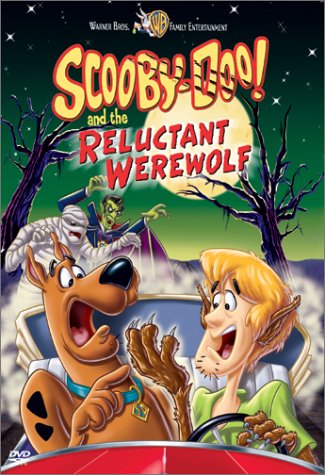 The third of three Made For TV Movies starring Scooby-Doo, Shaggy and Scrappy-Doo. The final installment of the Hanna-Barbera Superstars 10 series, it was also the last appearance of Scrappy-Doo in animated Scooby-Doo.

We open up to Tyler County, USAnote By process of elimination, it's most likely Texas, where the narrator introduces us to our heroes; Shaggy, hot-shot professional race car driver, Scooby and Scrappy, his on-board mechanics, and Googie, his "adoring but liberated girlfriend" cheering them all on.

But this happy scene can't last as we shift to...

Eh? What's that? Since when was Shaggy a hot-shot professional race car driver with a gorgeous girlfriend named Googie? Since, like, always man, don't you pay attention?!

Anyway, we shift to darkest Transylvania, where Count Dracula is holding a meeting of monsters at his castle. It's time to decide the Monster of the Year, but the Werewolf is absent, having gone into retirement. With one of the most iconic monsters AWOL, Dracula is about to call it all off until he learns of a special night—three of them—when the moon comes into position to make a new werewolf. Unfortunately, that new werewolf is none other than Shaggy!

Dracula sends his minions, the Hunch Bunch, a pair of hunchbacks, to America to transform Shaggy and bring him to Transylvania. Shaggy refuses to take part, however, and Dracula makes a deal with him: If Shaggy can win the Monster Road Race, Dracula will undo the transformation. However, the Count has no intention of letting his new werewolf go that easily...

This direct-to-TV movie includes examples of: