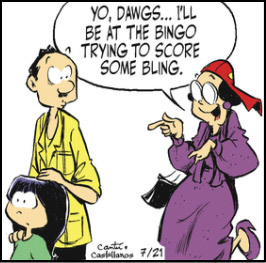 "By using current slang terms, Dunbar is trying to tell his children, 'I'm 'hip' or 'down', and you can talk to me about anything,'" Mayhan said. "He is unaware that his stilted speaking style, belabored references, and frequent incorrect usage of terms leave his children more confused than reassured."
— The Onion, "Area Father Must Have Read Some Drug-Slang Brochure Or Something

Having characters speak in Totally Radical slang is often annoying. It can be excruciating when the slang is outdated, misused, or just spoken wrongly. But sometimes, the other characters find it just as phony as the audience does.

This is when a character starts speaking like a Jive Turkey in an attempt to sound cool or relevant, and comes across as neither to other characters, who react with disdain (often Totally Radical disdain).

Characters prone to this include Valley Girl and Surfer Dude.

Not to be confused with Like Is, Like, a Comma. In-universe examples only, please! Instances of the audience reacting this way go under Totally Radical.

Alternative Title(s): Get A Load Of That Square