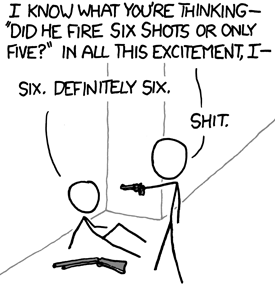 Dirty Harry meets Rain Man
"I know what you're thinking. "Did he fire six shots or only five?" Well, to tell you the truth, in all this excitement I kind of lost track myself. But being as this is a .44 Magnum, the most powerful handgun in the world, and would blow your head clean off, you've got to ask yourself one question: "Do I feel lucky?" Well, do ya, punk?"
— "Dirty Harry" Callahan
Advertisement:

The sign of The Gunslinger or Action Hero who's really been through more battles than anyone else, or how an exceptionally smart or otherwise gifted character takes advantage in combat: in a fight, they can count the number of bullets fired by themselves and their opponents, keep track of it all, and use this to their advantage. With proper military experience, they might even be able to identify guns by the sound they make to know what weapon their adversary is using, so they know exactly when they run out.

This trope is more likely to occur with revolvers, which usually have six-round cylinders, but some models have five, seven or eight, and a few experimental ones from the end of the 19th century had as many as twenty. Do note this isn't recommended in Real Life; counting bullets in battle is hard, and magazine sizes for models vary wildly. You better be sure you've guessed the correct model of the gun, and even then some guns allow you to chamber a bullet, meaning the gunman will have an additional round, not forgetting the fact they might just switch to a different gun or quickly swap magazines. Not to mention the possibility that if you're facing multiple opponents, they could be using different kinds of guns with different magazine sizes, and good luck keeping track of which bang came from which gun. So if you're in a middle of a fire-fight, and can only focus on how many bullets you've fired, that is recommended. note And maybe stop reading this.

A subtrope of Awesomeness by Analysis. Use of this trope will lead up to It Works Better with Bullets, Dramatic Ammo Depletion, and One Bullet Left. Compare against Bottomless Magazines where guns carry as many bullets as the plot demands.