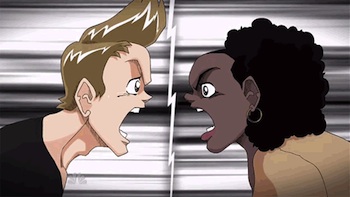 Jeff enlists Shirley to help him beat three obnoxious German students at foosball. While the experience initially helps bring them closer together, it ends up stirring up a history between them neither anticipated. Annie accidentally breaks Abed's autographed DVD of The Dark Knight with exclusive special features, and her efforts to conceal what she's done quickly result in chaos.

The Community episode "Foosball and Nocturnal Vigilantism" contains examples of: