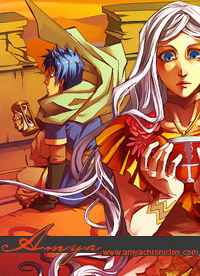 is a fantasy graphic novel about the adventures of a mute spell-touched girl and her unlikely companions as they are pulled into an adventure that is greater than any of them could have anticipated or ever expect to fulfill. This unlikely group traverses a dangerous world in search of answers amidst a brewing war.
Advertisement:

For a young spell-touched named Faye, trips to the market are a regular endeavour. However, when she runs into a figure from her past they are unexpectedly tossed into a journey neither of them could foresee. Join the adventure of this unlikely due as they traverse a high-fantasy world in search of answers amidst a brewing war.

Chapter Two : The Monster of Erishore

For two young adventurers such as Accel and Faye, the town of Erishore seems 'questionable' at best. A string of recent murders brings a new challenge to the pair as they struggle to find their way home, meet a new companion, and catch wind of daunting news that brings a new sense of foreboding to their situation.

Returning home seemed a simple task at first. However, as Accel and Kaden continue to lead Faye homeward they find the course of their fate is about to be altered for good. As the mystery surrounding Faye and her destiny continues to unravel, we will meet a new villain and find new friends along the road to Deepwall.