Webcomic / Anyone But Virginia 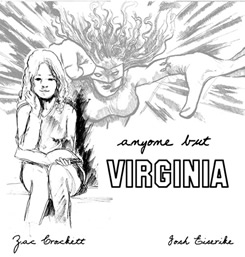 Please note where the focus is
Advertisement:

is a comic that focuses on the more mundane life of the super-hero Volcano Girl. It is Zac Crockett's (of Opey The Warhead) currently running comic on The Duck. Unlike Opey The Warhead, Zac doesn't write Anyone But Virginia — but it does feature his trademark artistic style.