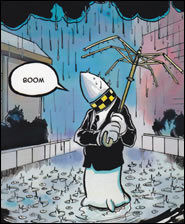 Don't let his appearance fool you; Opey's no "Woobie, Destroyer of Worlds"
Advertisement:

Opey the Warhead is the story of... Opey the Warhead. It'd be Exactly What It Says on the Tin except for the fact that you'd have little idea of what to expect if you ever came across a tin saying "Warhead, Opey Flavour".

Set in an After the End world of New Jersey, when his classmates realize the titular Opey doesn't explode on impact, he immediately becomes the target of the class's three bullies (there's a total of 6 children including Opey). Despite not having a face, Opey is amazingly expressive, being a generally sweet-natured kid.

Written and drawn by the talented Zoe (formerly Zac) Crockett (self-proclaimed typical starving artist), Opey features a real mix of Western and Manga style artwork — unique but extremely effective. The humour, much like the comic, is quirky with a Japanese flavour to it (Zoe studied in Japan), but it's very much its own beast.

Currently on hiatus, although there are some efforts by one of its fans to revive it... such as by creating a page for it on TV Tropes. You can read it here

. The comic's been published in Italy by ProGlo Edizioni as Opey, il ragazzo bomba