Webcomic / Nectar of the Gods 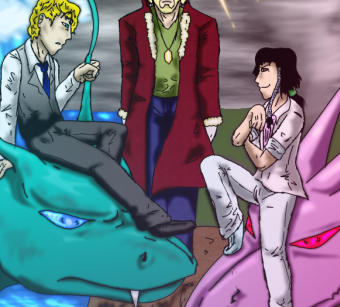 What?... Bartenders have ALWAYS ridden on dragons.
Advertisement:

Nectar of the Gods

is a digitally colored Slice of Life Webcomics which has been hosted on The Duck since October, 2009.

The story follows Bacchus Vindread, The Bartender, making his way through the world of bartending and customer service, which is very Serious Business. Every character is a bartender or has something to do with the service industry or beverage industry. Throughout the story he meets a lot of new customers who soon become some of his closest friends. An Evil, Inc. constantly attempts to make Bacchus join The Dark Side of the service world and become their US representative, and if that doesn't work, Murder Is the Best Solution.

The characters go through a lot of drama together, piecing together Bacchus' Mysterious Past, learning of several sad revelations in his young life.

There are also several Cocktail recipes you can try at home, teaches you other sides to alcohol that you might not already know, and has several lessons on how to mix drinks 'the best way you can'.

Other tropes associated with Nectar Of The Gods-