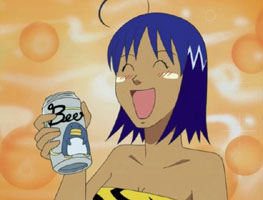 Would you believe she's also a mom?
"Why do stars
suddenly appear
every time
I drink beer?"
— Karen Ellis, "Planet Karen"

The ditzy, teasing, often inebriated party girl. She's usually a Pretty Freeloader without a care in the world and avoids some of the more inane plotlines of a story. This is only because she's somewhat capable but takes in the chaos that comes. Alternately, she actually causes those plotlines, as the Hard Drinking Party Girl is frequently The Trickster as well.

If she's anywhere near legal age, she'll also drink heavily. At her peak, she may be seen swinging from a chandelier.

She's almost never really a strong contender in a Love Dodecahedron if she is even interested in the lead at all. Characters might make mention of her being a casual dater, but since that might inflate the cast with unneeded extra male characters this will be usually be implied rather than shown. She'll channel her perverted behaviour into playful teasing of the lead male (if there is one), or even the other female characters! With all of this said, the Hard-Drinking Party Girl can sometimes act as a Trickster Mentor of sorts to the lead (or to both members of the Official Couple). In Anime and Manga, this character often speaks in a rougher accent than the others. Is often prone to a Beergasm. In some seinen, this is occasionally the main character who the audience (presumably) lusts over.

Loves to go on pub crawls with The Lad-ette. Most of these characters tend to be the Ms. Fanservice of the show, but there have been some exceptions. May grow up to become Lady Drunk. Might have been a Big Eater when young. Contrast Drunk on Milk, when the drink of choice is non-alcoholic. Lord help her, though, if she ever becomes pregnant! More seriously, she's also at a pretty good risk of eventually becoming The Alcoholic or a Lady Drunk.

Not unlikely to be the Life of the Party. The stereotypical male Fratbro is the approximate Spear Counterpart, although almost invariably presented as much less attractive for some reason. It also happens that a Camp Gay guy is a more literal Rare Male Example of this trope—sometimes to the point of being mistaken for a regular hot party girl when he inevitably crossdresses on a night out, in which case Hilarity Ensues.

Because Most Writers Are Male, and Girl on Girl Is Hot, the Hard Drinking Party Girl is often liable to find herself in a case of Alcohol-Induced Bisexuality.