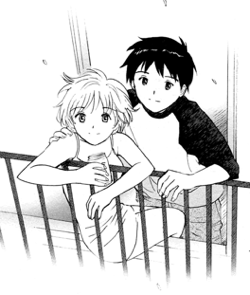 It's ok, because I'm with the one I love.
Today I will begin a new life that has light in it.
Advertisement:

Some years ago, a girl killed herself. She was only discovered when one of the neighbors reported a strange smell. When the police arrived, she had been dead for quite some time. The body had decomposed and was unidentifiable. The local paper ran a very small article about the event, which was quickly forgotten. Before long, it was as if this girl had never been alive.

Daikichi has lost his job and place to live. On the verge of homelessness, he ends up moving into an old, mostly abandoned and allegedly haunted apartment building. When he moves in, he meets Kana, a cheerful girl who is already there. As it turns out, she's been there ever since she killed herself in that apartment all those years ago. At first, Kana is overjoyed at having someone to talk to - and buy beer; boy did she miss beer. Daikichi is in denial that she could really be a ghost, but after running, quite literally, through her, he is forced to accept the fact. After a few beers, and a few more beers for her, Daikichi asks her about her death.

Kana doesn't remember who she was, or why she killed herself. She has only vague memories about the event. It was at sunset on a summer night. The only thing she remembers thinking was "I don't want to die at night." Nighttime scared her. So she sat down at a window and, while watching the sunset, stabbed herself in the chest. "Many times." The last thing she remembers seeing is her blood spurting out, sparkling in the light of the sunset, which seemed to her set the room on fire. She thought "How beautiful..." and died.

After Kana tells him this, Daikichi ponders if, given his circumstances, he wouldn't do something similar. Kana immediately tells him to never think that. No matter what, he must keep on living. A ghost telling him to live makes Daikichi laugh and he tells her he's sure he will be ok, at least for that night. They continue talking, and when he reaches out to point to Kana's chest where she should have had scars from her suicide, they are both surprised to find he is able to physically touch her. For a moment his hand is resting on her unscarred, soft breast. ("HEY! Ecchi!") That night they make love, and Kana remembers how it feels to be alive. In the morning, everything seems normal and Daikichi wonders if Kana might not have disappeared. He lifts the blankets and she peeks out, opens her eyes and says, "Good morning~" And they begin to fall crazily, deeply in love with each other.

As the story unfolds, local convenience store manager Inagawa Goro (39; soon to be 40; unmarried; occupation: convenience store manager; hobby: the supernatural) becomes more and more interested in Daikichi and Kana, looking for the supernatural experience he's wished for since he was a child. Later, we meet Utako, another "abandoned" girl who moves into the apartment with barely more than the clothes on her back and a guitar. With only a few expository lines from Daikichi, her vague backstory suddenly changes from "homeless" to horrifying.

My Lovely Ghost Kana is written and illustrated by Tanaka Yutaka, spanning a year of Kana and Daikichi's lives in three volumes, running from 2006-2009. Somewhere between Slice of Life and Magical Girlfriend, it's a story that deals with two people, their love for each other, and how their love carries them from their difficult pasts into a bright and hopeful future.

The overall story veers between Kana and Daikichi's growing relationship, her antics as a Genki Girl Magical Girlfriend, the occasional hints of the despair behind her death, quite a few Tear Jerker moments of heartwarming happiness and how Kana's life-after-death touches nearly everyone she meets for the better as she learns that it's never too late to be happy, never too late to love, never too late to live.

(One warning: this manga does have a lot of explicit sex, especially in the first dozen chapters. Very sweet, romantic, tender lovemaking; but things do get pretty wet and messy on a regular basis and it's nsfw.)