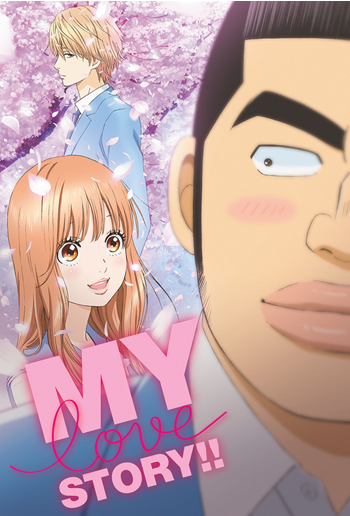 My Love Story!! (Ore Monogatari!!) is a manga written by Kazune Kawahara (High School Debut's author) and drawn by Aruko. The manga ran in Bessatsu Margaret from 2011 to 2016.
Advertisement:

The story follows giant high school freshman Takeo Goda. Takeo is a very kind person who uses his amazing physical abilities to help people, but he's never had any luck with girls because they think he's ugly or intimidating. Every girl Takeo falls for seems to be attracted instead to his good-looking best friend Makoto Sunakawa, who always turns them down. One day, Takeo rescues a girl named Rinko Yamato from a molester on the train, falling in love with her at first sight in the process. Afterwards she offers him her home-made sweets and starts hanging out with him and Suna. Takeo assumes that Yamato is just grateful that he helped her and that she's interested in Suna, but what he doesn't realize is that Yamato is actually in love with him! Could this be the beginning of Takeo's first romance?

Viz Media is releasing the series in the US and an anime adaptation produced by Madhouse was part of the Spring 2015 Anime line-up. Later in the same year, a live-action adaptation was also made.

, for people in the following areas: note United States (and its territories), Canada, Central and South America (including the Caribbean), Australia and New Zealand, Europe and the Middle East, South Africa and North Africa.