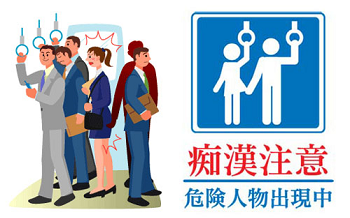 Japanese public transit is very crowded — in fact, the operating companies hire employees to help pack trains as full as possible at the height of rush hour (often struggling young or retired sumo wrestlers who need extra cash). Japanese society also has strict sexual mores that tend to stigmatize women who report sexual harassment. Therefore, a significant social problem is that of creepy strangers on public transit (or in parks) surreptitiously groping women, avoiding punishment either by hiding in the crowd and confusion, or by counting on a woman's sense of shame to prevent her from reporting the crime. These men are known by some anime fans as chikan (chikan is actually the act of sexual assault by groping, not the perpetrator), and signs are prominently posted in parks and on transit warning women about them. The females who engage in this behavior are called chijo.

As of 2006, the Japanese subways have addressed this problem by establishing women-only cars on every train. These are reportedly quite popular.note But it also created a bit of a backlash, as women who did not use (or missed) the women-only cars were assumed to be asking for it. However, their failure to completely solve the problem resulted in the introduction of routine undercover police patrols of subways in 2009, coupled with new awareness campaigns to encourage reporting and prosecution of offenders.

Due to differing social values, this trope is relatively-unknown in North America, Europe, and Australia, where a woman in this position is much more likely to scream bloody murder and possibly take a swing at the creep.