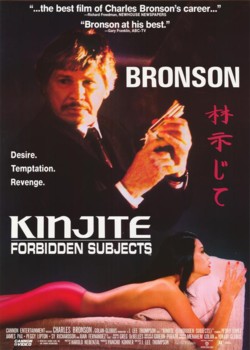 Kinjite: Forbidden Subjects is a 1989 Cannon film starring Charles Bronson. The film is the final movie J. Lee Thompson directed and was one of Bronson's final film roles, the other one being the reprisal of his Paul Kersey role for the final film of the Death Wish series.

Bronson plays another renegade cop out for vigilante justice on the mean streets. Lt. Crowe's target is Duke, a ruthless pimp who runs a child prostitution ring. This scumbag likes to kidnap teenage girls, rape them, hook them on drugs and put them out on the street. Because of Duke's slick craftiness and the fact that potential witnesses are unwilling to testify, Crowe is having a hard time taking him down. Duke's latest victim is a Japanese businessman's young daughter, who Crowe has been assigned to rescue.

Crowe, like many of Bronson's other characters, gets so fed up with Duke's actions that he takes the law into his own hands, firebombing the pimp's car and forcing him to eat his own $25,000 watch before issuing an ultimatum: quit the business now, or else. Duke, naturally, isn't inclined to do what Crowe says and continues his vile trade, which sets the stage for a violent confrontation.